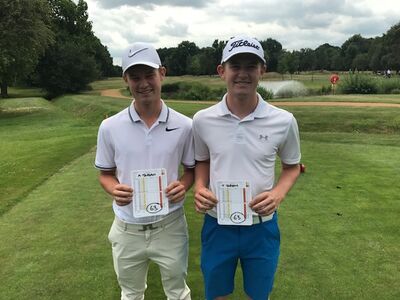 Twins Max and Tom Jordan now jointly hold the amateur course record at Langley Park, after Max’s gross 63 (nett 64 off his +1 handicap) in June this year equalled his brother Tom’s score of 63 at the Club in 2013.

Both twins began playing golf aged 10 joining Langley Park in 2007 and have tasted much success since then, with Max winning in the Faldo Series (South) in 2012, shooting a course record -9 in the 2016 English Amateur and currently has only missed one cut in events in 2017. Max begins a business management degree in golf at The Golf College in September and hopes to eventually turn pro.

Tom was ranked 9th best U18 player in England during 2015, achieving several top 10’s and a runners-up spot in the South of England Boys Open. His lowest handicap as an amateur was +3. After turning pro in 2016 he experienced his first win at the TP Tour Championships at Worplesdon shooting 6 under in the process, and has played regularly on the Europro Tour, Jamega Tour, TP Tour and Alps Tour. Tom has recently started working alongside Langley Park Head Pro Paul Sherman to begin his PGA studies.