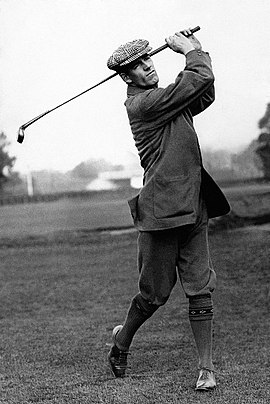 Although this week’s staging of the Open Championship at Royal St George’s Golf Club has had to be postponed until 2021 this summer still sees a notable golfing landmark for East Kent - the 100th anniversary of the Royal Cinque Ports staging the Championship for the second time.

The Open was first held over the Deal links in 1909 when JH Taylor won the fourth of his five Open titles, and the championship was then due to return to the Royal Cinque Ports six years later.

But in early 2015 year the R&A decided that the Open would not be held again until the First World War was over and although hostilities ceased in November 1918, it was further decided not to hold the championship again until 1920, with Royal Cinque Ports the venue.

The 1920 Championship was held from June 30 to July 1 with two rounds on each day, and  was the first under the permanent administration of the R&A which had taken over sole responsibility from the host clubs.

The total prize money on offer was £200, with £75 going to the winner plus a gold medal valued at £25, and after the opening 36 holes it looked as though England’s Abe Mitchell was going to triumph after he had opened up a six-stroke lead over the two players in joint second place, fellow countryman Jim Barnes and Scotland’s Sandy Herd.

However it was another Scot, George Duncan, who then “stoled the show” with one of the most memorable comebacks in Open history. Duncan started his third round 13 shots behind Mitchell after two opening rounds of 80 and, after the second round, Duncan went to the Exhibition Tent and purchased a new driver that was to help to dramatically change his fortunes the following day.

In the third round Duncan played himself back into contention with a 71 while Mitchell struggled to an 84, which meant that the leader going into the final round was England’s Len Holland who had a one-shot advantage over Barnes and Herd. But Holland and Barnes both finished with rounds of 79 while Herd could only manage a 75 for a total of 305, two shots behind Duncan who clinched his only career Open crown with a final round 72.

Meanwhile, down in joint 53rd place in what was his debut in the Open, was legendary American professional Walter Hagen who had already won the US Open twice in 1914 and 1919 but who found his initial experience of British links golf a testing one.

And Hagen’s mood probably wasn’t helped by the fact that he had to change into his golfing shoes in the Daimler car that he deliberately parked in front of the clubhouse after being told that the building was only for the use of amateurs That first “negative” experience however did not prevent Hagen from dominating the Open for the rest of the decade, during which he won the championship four times and finished in the top six on two other occasions en route to his career haul of 11 “major” titles.

And with modern-day Opens now requiring such a large area to cater for all the exhibition tents and other off-course infrastructure, plus the massive crowds, it is the Sandwich links which will  continue to host future Opens whenever the R&A decides to bring the Championship back to this part of the country.