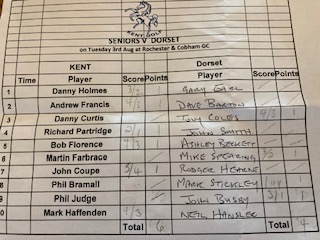 Martin lost 3&2 with his opponent holing everything and John won 5&4.

Phil Bramall lost 1 down, his game flowed either way until the Dorset player holed a couple of good putts to win a good match. Phil Judge lost 3&1 on his home course to another Dorset player who holed everything. Mark played great golf and won 4&3.

Final score Kent 6 to Dorset 4. Great effort by all the team.