From Mary Queen of Scots to Michelle Wie, there have been many women who have changed the course of women's golf, but there have been few more influential, yet so little known, as Gloria Minoprio, who cast a short, but magical spell over the British golfing scene during the 1930s.

Born in Liverpool in 1907, Minoprio came from a humble beginnings. After the death of her father while she was a teenager, Minoprio was brought up by her grandmother and two aunts in an all-female household. In search of a father figure, she came under the spell of William Gavin, a wealthy London businessman who was 40 years her senior.

Gavin's ex-wife, Margaret Gavin, had been the three-time US Open Women's champion, and Gavin was keen that Gloria learn the game too. So in the summer of 1930, Gavin, who pretended that he was Gloria's uncle, sent his 'niece' to have lessons with Jim Morris, the head professional at Huntercombe Golf Club in Oxfordshire, where she would spend up to four or five hours a day working on her game.

Remarkably, she only ever played with a 'cleek', a straight-faced club that was equivalent to a modern 2-iron, and refused to use other clubs even when playing out of bunkers or putting.

Although she lived in London with Gavin, Minoprio joined Littlestone Golf Club in Kent in 1931, and made regular trips down to the Kent coast in a chauffeur-driven Rolls Royce to practise on the links. Littlestone's club history records that although she never entered any club or county competitions, Minoprio's handicap was soon down to four - well below the nine handicap required to play in national championships - still using the one club. She never once entered the ladies clubhouse - or the main clubhouse from which women were excluded - during her membership, choosing to simply play her rounds before disappearing back to London.

Her first competitive outing came at the Ladies Amateur Championship in 1933 at Westward Ho! in Devon, where, aged 25, she caused something of a stir by arriving on the first tee wearing trousers - a sartorial first for women's golf. 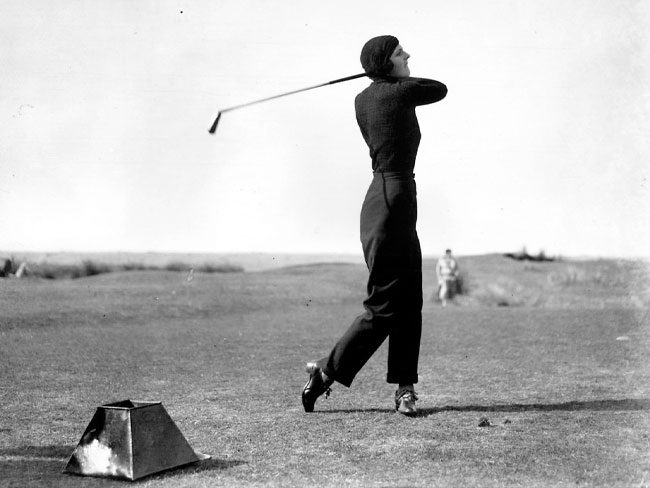 Although she lost her match to scratch golfer Nancy Halstead 4&3, news of a mysterious trouser-clad woman dressed all in black gripped the women's circuit, with golf writer Henry Longhurst, who was covering the tournament for Daily Mail, describing Minoprio as 'looking like a goddess waving a flashing rapier', while the Daily Express headline reported that Minoprio had 'opened a sensational new chapter in women's golf'.

She certainly cut a striking figure. Tall and thin, she wore white powder make-up and red lipstick, and sported a scarlet waist-length jacket, which she removed just before each match, handing it to her caddie. Never engaging in conversation with fellow players or spectators, she hit her shots, used a duster to wipe her club, and walked on, politely shaking hands with her opponents at the end of the match before disappearing.

The following year, aged 26, Minoprio entered the LGU Championship, first time at Seacroft Golf Club in Skegness, where she made history when winning her first round match against Betty Sommerville using just one club. However, her second opponent, Mary Johnson, runner-up in the previous year's championship, proved a much tougher proposition and Minoprio was comprehensively defeated.

For the next six years, Minoprio continued to compete only in national championships - in trousers and with her single club - but with limited success.

Her best individual round came in the 1936 LGU Championship at Southport & Ainsdale, where she shot 84. Her last championship was in 1939 at Royal Portrush in Northern Ireland, where she entertained her competitors with magic tricks - a skill which she had learned in between practising her golf. She later became an accomplished magician, travelling to India to put on shows for maharajahs in return for charitable donations.

After the war, Minoprio disappeared off the golfing scene forever. She married a polish man who had fought in the British Army, and together they scraped by earning money working in hotels. In 1958, the couple moved to the Bahamas to work at another hotel. Soon after her arrival, Gloria became ill and died from septicaemia, aged just 50.

It is perhaps fitting that Henry Longhurst, who, like many golf writers of the era, seemed to have fallen a little bit in love with her, has the last words: "Crowds flocked to walk round with her, workmen dropped their tools to watch her pass, her picture was in every newspaper, her name upon every lip. It is difficult to think of this lady as a golfer, and yet there is no doubt that Miss Minoprio is a most accomplished player, handicapped only by her refusal to use those instruments which make the game most easy."