Karen Stupples was born in Dover, and started her golfing career as a caddie for her father at Prince's, where she became a member.

Karen came up through the County coaching programme and represented Kent successfully at both Junior and Women's 1st team levels. She went on to play for England Juniors from 1989–1991 and England Seniors from 1995-1998. She also represented Great Britain & Ireland on the Curtis Cup winning team in 1996 at home in Killarney, Ireland and losing 1998 team away in Minneapolis, Minnesota.

Despite being a professional, Stupples returned home to England becoming a cloakroom attendant for the Port of Dover and waitressing at a public golf course in Kent as she did not have the money to take a run at LPGA Qualifying School. When a regular restaurant customer offered to sponsor her for three years, she and her husband sold their house, furniture and car and moved to the United States where she earned non-exempt status on the LPGA Tour by tying for 52nd at the 1998 Final Qualifying Tournament.

Stupples made her professional debut in Hawaii and, after a season in which her best finish was a tie for 8th, she returned to the LPGA Final Qualifying Tournament, where she tied for 17th to earn exempt status for the 2000 season. Over the 2000 - 2003 period, she achieved 7 top ten finishes, but her form transformed in 2004.

After finishing second behind Annika Sörenstam at the ANZ Ladies Masters in Australia, Stupples carded the best 72-hole raw score in LPGA Tour history (258) to win her maiden title, the Welch's Fry Championship, by five strokes. This win made her eligible to join the Ladies European Tour and begin earning points for the 2005 Solheim Cup. She had not joined the LET when joining the LPGA as she could not at the time afford the joining fee of £600. She followed this up by winning the Women's British Open at Sunningdale where she became only the second player in history to record a double eagle or albatross at an LPGA major championship (began the final round with an eagle, albatross on the first two holes). She became only the third English player to win a major after Laura Davies and Alison Nicholas and was the first home winner since Penny Grice-Whittaker in 1991. She crossed the $1 million mark in LPGA career earnings at the U.S. Women's Open and finished in sixth place on the money list.

At the end of 2004, Stupples was made an honorary member of Royal Cinque Ports Golf Club in Deal, the Kent golf club which she first joined as a 15-year-old.

In 2005, Stupples represented England at the 2005 Women's World Cup of Golf in South Africa alongside Laura Davies, was one of Catrin Nilsmark's five wild card picks making her Solheim Cup debut at Crooked Stick GC, in Carmel, Indiana and was part of the International Team at the Lexus Cup.

At the 2014 Women's British Open, Stupples announced her retirement from professional golf.

She now has a successful career as a golf commentator on US TV.

The black and white photo below shows Karen with her first England bag. 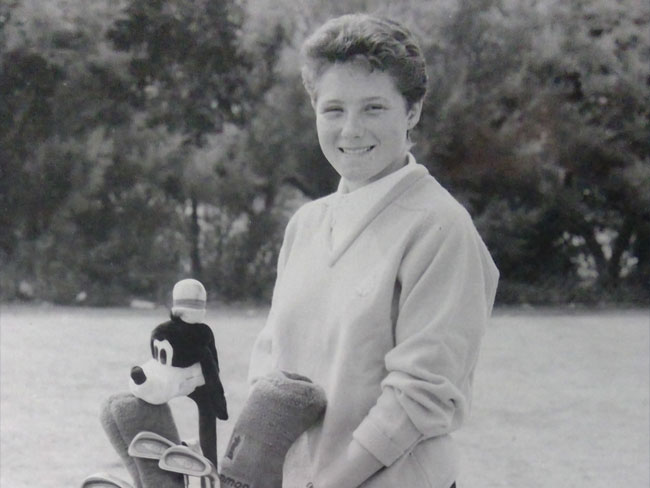