North Foreland was the venue for the County Championship from 10th to 12th June 2022 and what a tournament it was. A new generation of players coming through meant seeing one of the youngest and most talented fields the county has ever seen.

After 3 consecutive years of torrential downpours reducing or suspending play at the county championships, sunshine and a 25-30mph wind must have been a welcome relief to the players in comparison!

It helped to provide some erratic and exciting scoring, with 15 eagles mixed with 90 triple bogeys or worse over the two rounds.

The morning round saw Jacob Kelso of Kings Hill, leading the way, with a 2 under 69 which mixed 3 birdies with a solitary bogey. Oliver Lewis-Perkins of Mid Kent Golf Club’s was in 2nd place with a level-par 71. With Jack Shipton, Royal St George’s, Harry Spellman, North Foreland, and Callum Tibbs of London Club all within 3 shots of the leader, it left the top 5 players all aged 21 or under!

The afternoon round belonged to Liam Burns, the competition's former winner on no less than 4 occasions and looking one of the favourites for a 5th title, with his 1 under 70. Although Liam was ruing the finish of 3 straight bogeys, the eagle and 3 birdies still meant a fantastic round of golf in the ever-increasing wind.

Callum Tibbs also followed his morning round of 73 with a 72 to claim 2nd place in the standings and a more favourable draw for the match play at the weekend. This 2nd round score was matched by Ryan Whitington of Sheerness to claim 4th place, sandwiching Oliver Lewis-Perkins into 3rd after another steady 74, matching Callums +3 total. Luke Spooner also shot an impressive 73 to finish on +6 and in 6th place.

Lee Carew improved by 11 shots in the afternoon with a 73, unfortunately missing out on qualifying for the weekend's match play by one shot. The afternoon wasn’t a great one for home player Harry, who couldn’t follow his morning round and also missed out on the weekend.

A much calmer and warmer day on Saturday meant an exciting day of match play with many more eagles and birdies ensuring the quality remained high. Eventually, the players making it through to the final day’s play and semi-finals were Matthew Gibson of Royal Blackheath, Luke Spooner, Liam Burns and Daniel Cooke of Canterbury.

The first match saw Luke Spooner take on Matthew Gibson, with a “Gimmee” eagle at the par 4 2nd for Matthew, the match promised to be of a high standard and did not disappoint and ultimately it was Luke that was to become the first confirmed finalist in 2 hours and 20 mins with a 6&4 victory.

A much tighter affair between Liam Burns and Daniel Cooke saw a topsy-turvy match go down to the last hole and a putt left in the jaws for birdie by Liam, saw Daniel book his place in the final with a 1up victory.

The final itself was another topsy turvy affair with Luke taking a 2-hole lead after 7 holes, but a birdie at the par 3 11th saw Daniel claim one back and a bogey at the 13th from Luke drew the scores back level. Daniel made the momentum count, winning the 14th and 16th to open up a 2-hole lead. With Luke finding trouble from the tee on 17 and failing to find the green with his 3rd shot, Daniel kept his nerve to chip to 6 feet, meaning Luke needed to chip in or leave Daniel with 2 putts for the match. A terrific attempt went close but meant a concession of the match for a 3&1 win for 2022 County Champion, Daniel Cooke, congratulations to Daniel!

Daniel's distance off the tee and powerful recovery shots, as well as his mental strength in overturning deficits were a huge factor in his victory and promises many future successes in the game. We wish Daniel the best of luck at the England Golf Champion of Champions at Woodhall Spa on the 10th & 11th September! 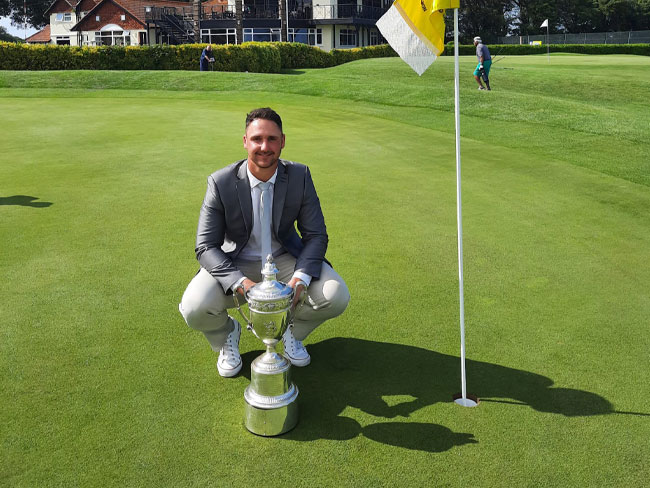