Congratulations to everyone for reaching the Kent knockout finals. All the matches were played in good spirit on a sunny but windy day, which for some made the course challenging.

The morning started with the Kent Amateur Foursomes which is a Scratch match play competition with two pairs playing for an aggregate win over 18 holes.
Pair A – Referee Ken Hannah
Sheerness - Jamie Paton & Toby Simmance
Gillingham - Ryan Dray & Darren Martin
Gillingham pair A took the lead from the 3rd hole and kept very steady throughout the game to finish on the 18th hole 4 up. Sheerness did try to gain some ground with Toby achieving a hole in one on the 16th!
Pair B – walking scorer Robin Cunningham
Sheerness - Jack Johnston & Paul Boozer
Gillingham - Matt Thomson & Gareth Jones
This match was a more balanced affair with Sheerness being 1 up on the turn and resulted in a 2 up win for Sheerness.
Aggregate result was a win for Gillingham (pictured below). 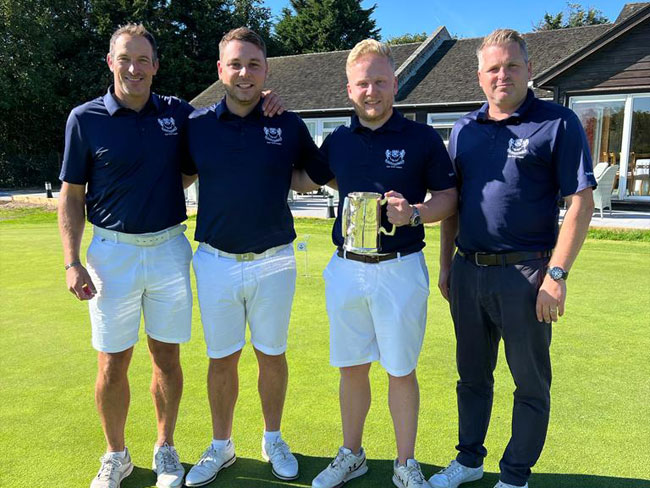 This was then followed by the Kent Junior Foursomes which is a handicap match play competition with two pairs of differing handicaps playing for an aggregate win over 18 holes.
Pair A - HI max 10.4 (boys) 15.4 (girls) – Referee Jon Vail
Dartford – Sasha Hellen & Tommy Hulance
Mid Kent – Cameron Garcha & Roan Keane
This started off a balanced match with the score all level up to the 9th hole. Dartford then took the lead and never looked back to have a 6 up lead on the 18th.
Pair B – HI max 20.4 (boys) 30.4 (girls) – Walking scorer Anna Cooper
Dartford – Haiden Matos & Bertie Hallows
Mid Kent – Charlie Gunning & Harry Lewis
Mid Kent took an early lead but yet again Dartford played steady golf to get the match back to level after 9. Mid Kent then regained their lead resulting in a 3 up win on the 18th.
Aggregate result was a win for Dartford (pictured below). 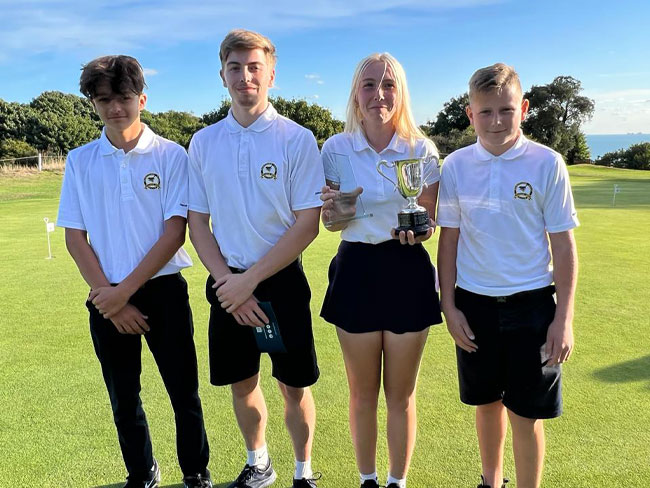 Captains Cup – White and Red Tees
Mixed Foursomes match play competition with two pairs of differing handicaps playing for an aggregate win over 18 holes.
Pair A (lower HC) – HI plus to 14.4 (men) & plus to 20.4 (ladies) – Referee Kathie Mabberley
Knole Park – Andrew Campbell & Debbie Hart
Bearsted – Andy Brown & Sheila Marsden
Bearsted took the lead in this match being 1 up after 9 holes with Knole Park pulling it back on the 12th. Bearsted then dug their heels in to take the lead on the 16th being 2 up with 2 to play, however Knole Park never gave up the fight as they managed to level the match on the 18th. This resulted in a sudden death playoff between them with Knole Park winning on the 19th.
Pair B (higher HC) – HI 14.5 to 28.4 (men) & 20.5 to 36.4 (ladies) – Walking scorer Jon Mabbs
Knole Park - Hamish Todd & Sian Todd
Bearsted – Malcolm Austin & Di Waghorn
In contrast Knole Park took an early lead in this match being 3 up after 9 holes, however this time it was Bearsted who fought back to level the match on the 18th.
Aggregate result was a win for Knole Park (pictured below). 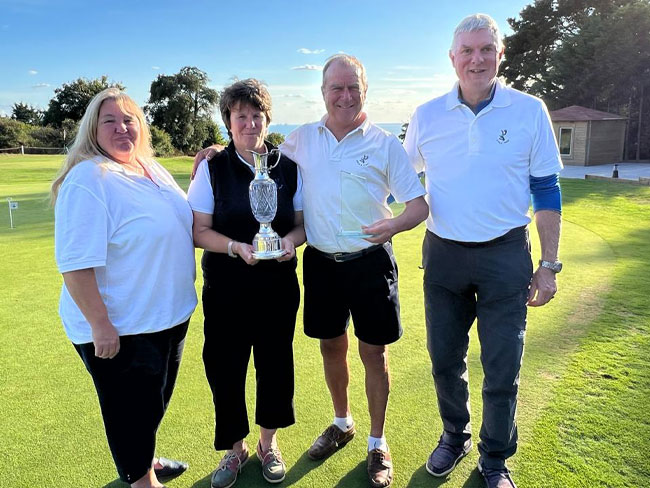 Kent Top Club – White Tees (HI 5.5 to 28.4 inclusive)
4BBB match play off handicap competition with two pairs playing for an aggregate win over 18 holes.
Pair A – Referee Ian Palmer
Bearsted – Paul May & Mark Richards
Gillingham – Rob Baldwin & Nick Terry
This started off a very even match with Gillingham being 1 up after 3 holes. Bearsted then took a steady lead to result in a win of 4 up.
Pair B – Walking scorer Mark Gregorian
Bearsted – Gorden Milne & Paul Reynolds
Gillingham – Paul Bentley & Rob Kelly
Another very steady start for both teams with Gillingham being 1 up after 6 holes. Bearsted remained very steady resulting in a 2 up win.
Aggregate result was a win for Bearsted (pictured below).

Kent Golf would like to thank Bruce and his team at Sene Valley for making this an enjoyable and successful Finals Day.

Refreshments were provided by Chef Debbie, bar manager Abbie and their teams.

The day concluded with prize giving with presentations being made by Chris and Elaine Tappin who are the founders of the Captains cup. Both Chris and Elaine are former Captains
and Presidents of Kent Golf.

I would also like to thank all the volunteers, which includes all the referees and walking scorers and Simon Wood for starting all the matches.