A brisk but beautifully autumnal morning greeted us at The Weald of Kent for the Oscar Ash Cups. The course looked very inviting, bathed as it was in early morning sunshine, and twenty-nine competitors teed it up in the hope of winning the 36-hole event.

After the morning round it was tight at the top of the gross leaderboard with 12 players within four shots of each other. Leading the way on 75 were home player, Matt Taylor, James Moore (Dartford) and Joe Skirrow (Prince’s). One shot behind was Ian Smith (Sittingbourne and Milton Regis).

The nett leaderboard was also promising a close finish with local player Robert Frost holding a slender lead over Taylor and Cliff Earl (Corinthian). Frost kept his steady form going in the afternoon to add a nett 71 to his morning 69 to win by two shots from Scott Woolford (Littlestone), who moved up the leaderboard after a best-of-the-day nett 68. Third place in the handicap went to Nick Nowotny (Bearsted) on countback from Cliff Earl.

In the scratch event, Teddy Friend (Dartford) had the best round of the day with an afternoon gross score of 73 giving him a two-round total of 150. Alas, due to his recent good form, Teddy’s handicap index had dropped just 0.1 too low to allow him to take a prize. But one man’s disappointment is another man’s glee and hopefully it will be some consolation to Teddy that it was his fellow Dartford member, James Moore, who benefitted! James also finished on 150 after matching rounds of 75, to win by three shots from Nick Nowotny in second, and Sam Willison (Bearsted) in third (happy birthday!).

Many congratulations to our Oscar Ash Champions for 2022 – Robert Frost (handicap) and James Moore (scratch).

All competitors enjoyed the Weald’s hospitality and a good day was had by all.

Hopefully more of the same next year when the Oscar Ash Cups will be held on the 20 th September at Kings Hill Golf Club. 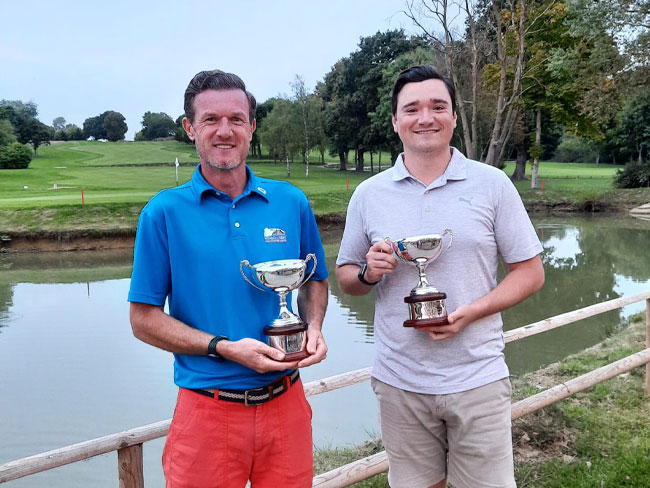