Although it felt more like winter at times, it was a sunny autumn day at Weald of Kent for the 27-hole Doxford Foursomes.

Eighteen pairs of ladies arrived bright and early to do battle in this testing format on a quietly demanding course. Only three teams scored more than 30 points in the morning with Nikki Bell and Amanda Rose (Nizels) leading the way with 34. The Ashford pair of Karen Pickering and Tracyann Wood were laying second on 31 with Rosalyn Cox and Josee Gray (Langley Park) only one shot behind.

The afternoon nine holes proved equally as demanding but Nikki and Amanda maintained their good form and scored 15, giving them a total of 49 points and the Doxford Salvers.

The 18-hole Doxford Horse Trophies were also won by Nikki and Amanda for their 34 points but they could not take more than one prize. Therefore, first prize went to Karen and Tracyann (31) and

Thanks, as always, to our lovely referees and helpers – Judith Halliday, Peter Long, Kathie Mabberley, Anna Cooper and Robin Cunningham.

We hope to see everyone for the next Doxford Foursomes on Thursday 12 October 2023 at Dartford Golf Club. 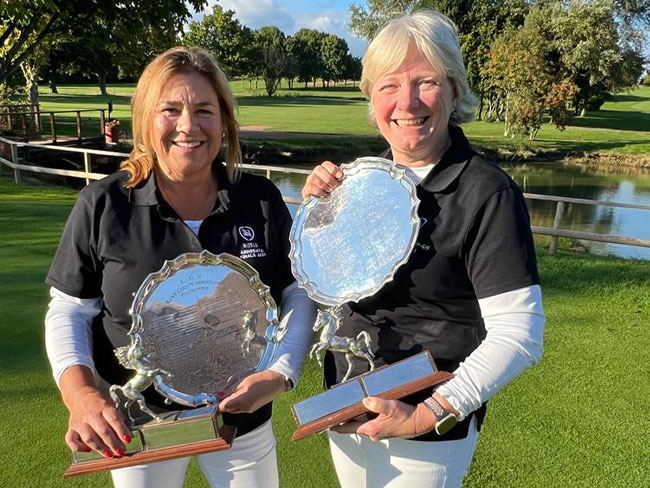