The R&A and USGA have unveiled a regular update to the Rules of Golf as they continue to make the Rules easier to understand and apply. The new Rules will go into effect on 1 January 2023.

The 2023 edition continues the modernisation process, with an emphasis on both inclusion and sustainability. For the first time, the modified Rules for players with disabilities have been fully incorporated into the playing rules without the need to adopt a local rule. The governing bodies, supported by longstanding partner Rolex, will also promote digital and mobile app access to the Rules while significantly reducing the production and distribution of more than four million printed books. Several penalties have been relaxed and language has been clarified to help golfers at all levels of play.

- Handicap Usage in Stroke Play: With the continued growth of digital scoring following the adoption of the World Handicap System, players are no longer required to show their handicap on their scorecard in stroke play. The Committee will be responsible for calculating the player’s handicap strokes for the competition and using that to calculate the player’s net score.

- Club Damaged During Round: The Rule has been amended to allow a player to replace a club that is damaged during a round, provided the player did not damage it through abuse.

- Ball Moved by Natural Forces: A new Exception provides that a ball at rest must be replaced if it moves to another area of the course or comes to rest out of bounds after being dropped, placed or replaced.

- Back-on-the-Line Relief Procedure: The back-on-the-line relief procedure, often used for penalty area and unplayable ball relief, has been simplified so that the player now drops their ball on the line, and the ball must come to rest within one club-length of where it is dropped.

Golfers will be able to learn more about the major changes and view the official 2023 Rules of Golf by following the links below or by visiting RandA.org. 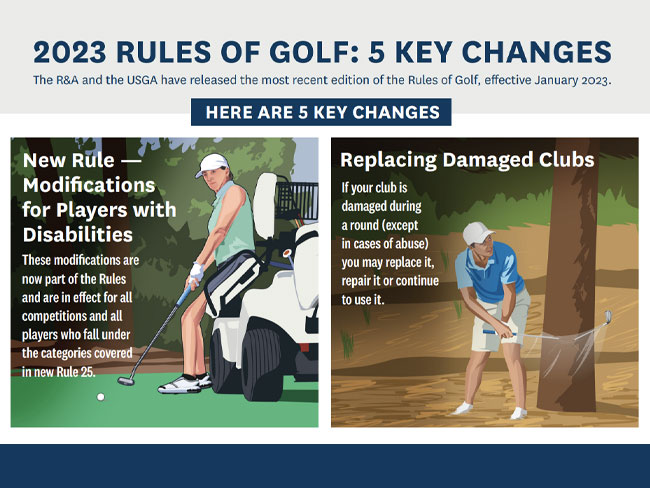