This year’s Mid-Age Championship saw 59 players battling it out over 36 holes at the beautiful and historic Royal Blackheath Golf Club.

The previous days rain had softened the course but the early morning sun soon dried things up and with the hard work of Head Greenkeeper, Allen Blizzard, and his team, left the course in excellent condition for the players.

The wind still provided a stern test though, with many struggling in the first round despite the quality of players in the field.

Only two players managed a sub-par round, with 2 under 69 from Lloyd Nutley of North Foreland, briefly holding the clubhouse lead, until Danny Jones from Wildernesse shot 3 under to take the halfway lead.

A bad start to Lloyd's 2nd round took him out of contention, leading to a 79 and a share of 5th place. Meanwhile Tony Coulstock of Shortlands Golf Club had a 5 shot improvement to soar up the leader board and hold the club house with a final score of 3 over par. With Joe Hooper, Wrotham Heath, also improving on his 2nd round to claim 3rd place with a final score of 4 over.

The day belonged to Danny Jones though, who held his nerve to claim a comfortable 5 shot victory and remain the only player under par for the day, with his final score of 140. Congratulations to Danny.

The Nett prizes were won by Gavin Caldwell of Chislehurst, 3rd nett with 146, Tony Coulstock of Shortlands, 145 and our Nett winner was Club Captain, Martin Leather with a score of 143, who didn’t have far to collect his trophy as he was there to welcome the players and hand out the prizes. Congratulations to you all!

Our sincere thanks to the club Secretary, Mark Hickson, and his team for all their hard work in helping to put on such a great event for the players. And finally to the volunteers, without whom we could not hold these events. 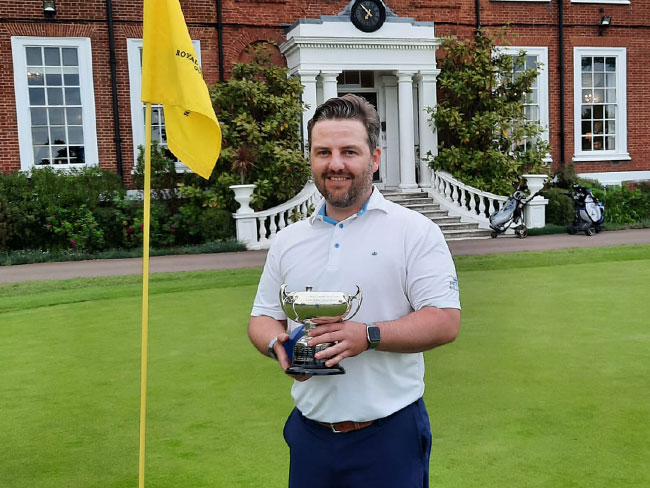